In the marketing world, they often say that getting content to go viral is a “stroke of luck”. But this weekend, one of the videos that I’d published on one of my YouTube channels back in 2014 has gone viral again. I’ve previously published a post about doing YouTube SEO and what I’d seen with that same video gaining traction on YouTube.

Here’s the video below.

Since April 28th, I started to get notifications in my Gmail with people commenting on the video and subscribing to the channel. The YouTube channel “Lollivia” has been dormant for a while as I’ve focused my energy on developing my agency’s YouTube channel.

A friend of mine that I used to work with in London sent me the following message.

Here’s the screenshot below.

It was 6am when I received the message, so I actually missed the video being on the front page. But I took a screenshot of the video on the second page of Reddit. 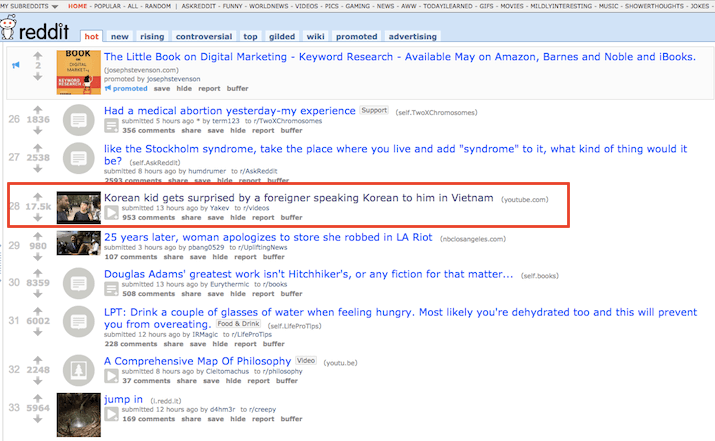 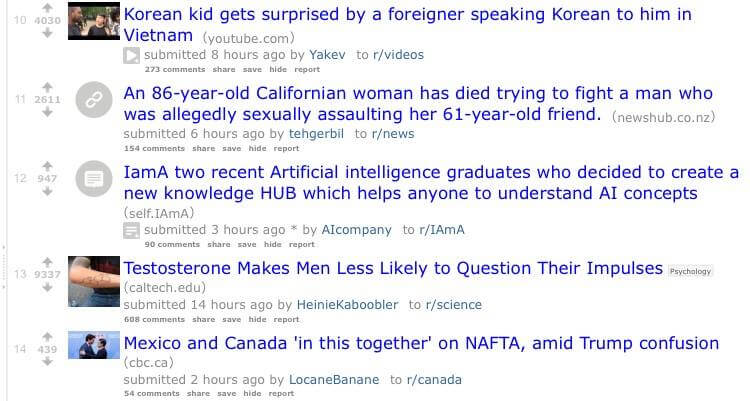 When I checked the link, there were over 900 comments on the Reddit thread.

In 48h, there’s been over 250 additional subscribers and probably another 100 comments added to the video.

What made this video go viral?

At the moment, there’s a lot of news about the North Korean crisis, so it is possible that the information trend has contributed towards this.

I have previously published a Reddit advertising case study on this blog, which talks about how I tried to get some traction on Reddit, but unfortunately it didn’t succeed.

The person that shared this video was obviously an engaged Reddit user and it might have been that the sub-reddit community that they shared it to resonated with the content and made it go viral.

I wish I could give you more insight into how to make content go viral on Reddit, but the only thing I can definitely say is that the content that you produce needs to resonate with an audience.

I also noticed a spike in my Lollivia.com website’s referral web traffic as a result of people clicking on the link from the video. You can see a screenshot of my site’s analytics below.

One of the things that I can definitely say is that it is important to publish content that resonates with an audience. This video is almost three years old, but in the last 48h, it has received over 600,000 views. Publishing content is important in order to create opportunity for exposure, sharing and links. Sometimes it happens quickly and other times (as in this case) it takes a long time for things to start kicking in.

Below is a screenshot showing some of the places where people shared the video directly from the platform.

In the screenshot below, you can see how the video has been shared on several sites on the web just by doing a Google search for the video.

The video is still going viral. I will share as much insight as possible.

If you have any thoughts, please leave them in the comments section below.

Would you like to create interesting viral videos? Click here to invest in advanced video editing software Adobe Premier Pro.

Developing marketing systems that are proven to work is my passion. It delivers value and wealth for both customers and entrepreneurs. I want to share information that will help empower you to develop a successful marketing system through SEO, Content marketing, PPC, Social Media and more. Subscribe to the blog and follow me on social media to keep up to date with the latest information.

This site uses Akismet to reduce spam. Learn how your comment data is processed.